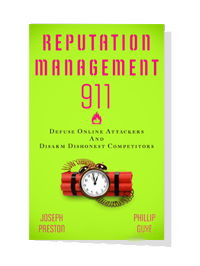 It Only Takes A Second…

A world famous singer viciously beats his celebrity girlfriend and the horrendous pictures of his victim are distributed all over the Internet.

A comedian is filmed engaging in a racist outburst and the video is downloaded millions of times.

A once reputable organization is vilified online for threatening to sue a low-income family because their grandson illegally downloaded some songs on the web.

What do these stories all have in common?

These reputation damaging accounts received a massive level of online exposure and publicity that can be directly attributed to advances in technology. And, although these are not recent events, the stories, videos and pictures are still widely available to anyone with Internet access and a cursory familiarity with Google.

Have you heard the old adage that it only takes a second to destroy a reputation?

It only takes a second to destroy a reputation built over a lifetime, everyone will know about it within the next couple of hours, and the evidence will reside online forever.

If you and your reputation are going to survive, you’d better be prepared to defend yourself, your family and your company by any means necessary. That’s where this book comes in.

The speed in which the Internet can expose and amplify a negative story is so powerful that you must be in a position to respond quickly and appropriately. Making a decision when emotions are running high and time is short is never a smart move, so you can only do this effectively if you already have a strategy in place.

Prev. Resource
All Resources
Next Resource

Get new free e-books by email:

We never spam. Sign-up to get new digital marketing e-books monthly in your inbox.

More on digital marketing in our blog

Welcome to WordPress. This is your first post. Edit or delete it,…
Continue reading

The simple answer is no - search engine submission isn’t necessary. The majority of…
Continue reading

Can Any Inbound Linking Hurt My Ranking?

The Importance of Anchor Text in Back-links

The importance of anchor text with respect to a linking strategy cannot be overstated.…
Continue reading

Incorporation of Company Branding and SEO

SEO is not an exact science. This becomes apparent when trying to…
Continue reading

Strategic Use of Images in Search Engine Optimization

When assessing page structure and layout, there is a subtle, yet strategic way to…
Continue reading
Call Us now at +1-202-438-9199